Also you can find the first part of this post here:
https://xrdocs.io/ncs5500/tutorials/ncs5500-qos-part-1-understanding-packet-buffering/

This second blog post will take concrete examples to illustrate the concepts covered in the first part.
The NCS5500 is based on a VOQ-only, single-lookup and ingress-buffering forwarding architecture.
We will use a lab example to illustrate how the system handles bursts, then we will present the monitoring tools / counters we can use to measure where packets are buffered, and finally we will present the data collected on 500+ NPUs in production.
This should answer frequently asked questions and clarify all potential doubts.

For this first part, and following customer request, we built a large test bed: 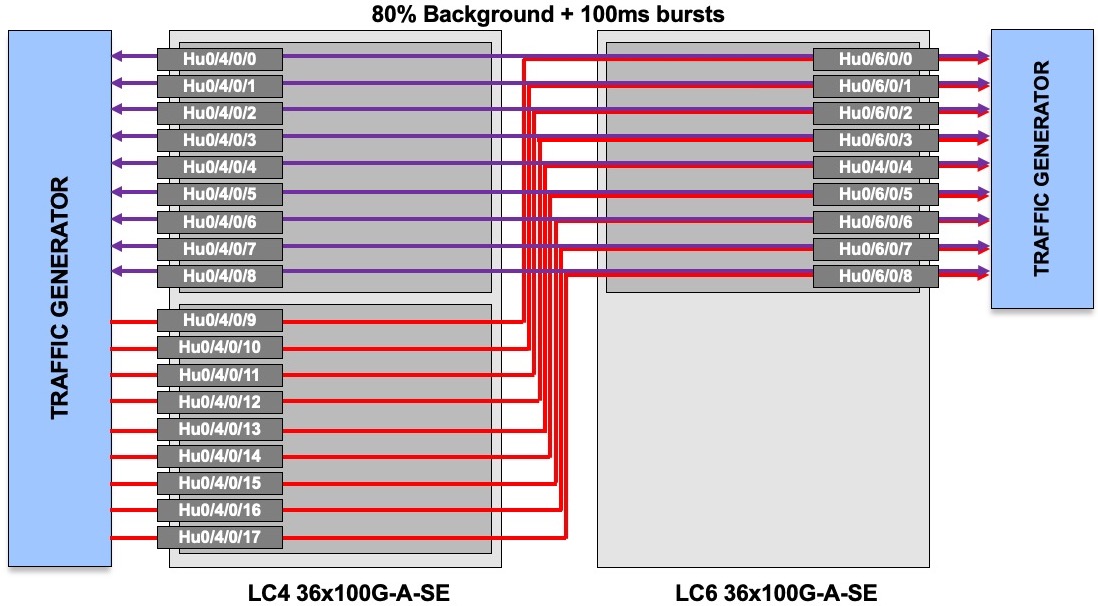 We generate a background / constant traffic of 80% line rate (80Gbps on each port) between two NPUs. This bi-directional traffic is displayed in purple in the diagram above.
Then, we will use the remaining 9 ports to generate peaks of traffic targeted to the ports Hu0/6/0/0-8 (shown in red in the diagram).
These bursts are lasting 100ms, every second.

On the tester, we didn’t make any specific PPM adjustment and used internal clock.

On the router, no specific configuration either. Interfaces are simply configured with IPv4 addresses (no QoS).

The tests performed are the following:

This test is basic but has been requested by several customers to verify we had no drop in such situations. It proves it’s not the case, as designed.

In the former test, we used specific counters to verify the buffering behavior.
Let’s review them.

We will collect the following Broadcom counters:

To get the DRAM reject counters, we will use:

None of these counters are available through SNMP / MIB but instead you can use streaming telemetry:

We have the counters available and we asked multiple customers (25+) to collect data from their production routers.
In total, we had information for 550 NPUs transporting live traffic in multiple network positions:

The data aggregated is helpful since it gives a vision of what is happening in reality.
The total amount of traffic measured is tremendous: 24,526,679,839,376,100 packets!!!
Not in lab, not in academic models / simulations, but in real routers.

With the show commands described in former section, we extracted:

Dividing MMU_IDR_PACKET_COUNTER by ENQUEUE_PKT_CNT, we can compute the ratio of packets moved to DRAM.
–> 0,151%
This number is an average value and should be considered as such. It shows that indeed, the vast majority of the traffic is handled in OCB (inside the NPU).

Dividing ENQ_DISCARDED_PACKET_COUNTER by ENQUEUE_PKT_CNT, we can compute the ratio of packets taildropped.
–> 0,0358%
Having drops is normal in the life of a router. Multiple reasons here, from TCP windowing to temporary congestion situations.

Finally, RjctDramIneligiblePktCnt will tell us if the link from the NPU to the DRAM can get saturated and drops packets with production traffic.
–> not a single packet discarded in such scenario.

In this chart, we sort by numbers of ENQUEUE_PKT_CNT: it represents the most active ASICs in term of packets handled.

For the most busiest NPUs collected, we see the DRAM ratio and taildrop ratio being actually much smaller than aggregated numbers.

How to read these numbers?

First of all, it demonstrates clearly that most of the packets are handled inside the ASIC, only a very small portion of the traffic being evicted to DRAM.

Second, with RjctDramIneligiblePktCnt being zero in EVERY data collection, we prove that bandwidth from NPU to DRAM (900Gbps unidirectional) is correctly dimensionned. It handles the real burstiness of the traffic without a single drop.

Last, the data collected represents a snapshot. It is recommended to collect these counters regularly and to analyze them with the network activity during the interval.
Having higher numbers in your network may be correlated to a particular outage or specific situation.
Having small numbers, in the other hand, is much easier to read (no drops being… no drops).

In conclusion, the ingress-buffering / VOQ-only model is well adapted for real networks.

We have seen “academic” studies trying to prove the contrary, but the numbers are talking here.

A sandbox, or an imaginary model are not relevant approach.

Production networks deployed all around the world, in different positions/roles, transporting Petabytes of traffic for multiple years, prove the efficiency of this architecture.