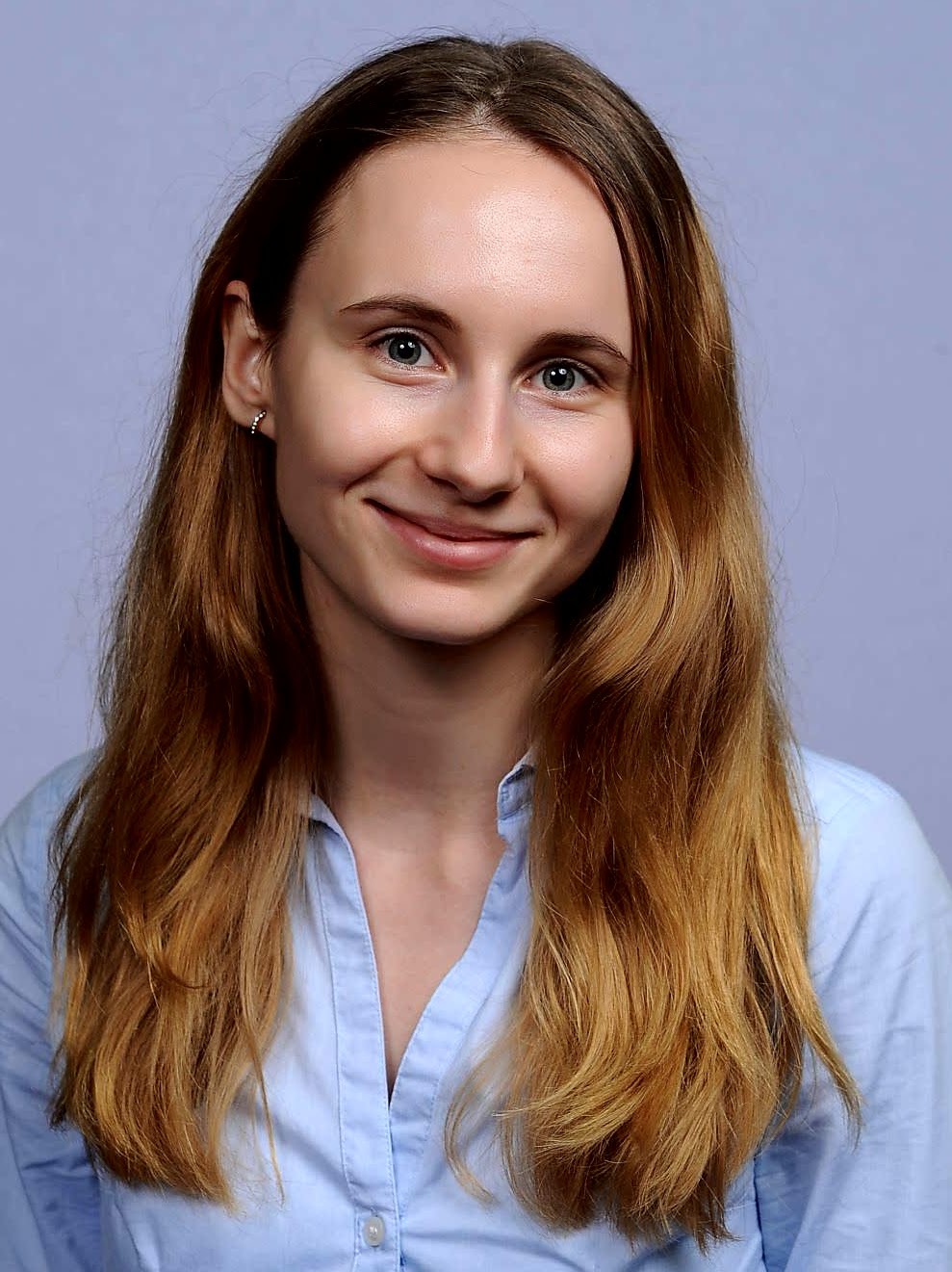 Was in search for 42 - the answer to life, the universe and everything; found it in Informatics. Systems Engineer at Cisco.

This development complements the features of Cisco WAN Automation Engine (WAE). WAE is a software tool that permits definition, maintenance and monitoring of a network. It can gather and use information coming from snapshots of the topology, device configurations and telemetry from an operational network. The approach presented here makes use of SNMP traffic data collected by WAE, to which a model has been fitted. Currently, the model is built based solely on traffic information. However, ideally, the project could mature into one that is suitable for production, where additional telemetry-based features of the network are brought in, e.g., number of paths and link failures. The model can be used as an estimator for what if scenarios, predicting a change in the traffic and thus anticipating the need or ability for a network change. A first application could be the provision of future network maintenance windows. Knowing in advance the suitable time and values of the traffic would allow for an optimised maintenance process, opening the window for anticipated network adjustment.

With the development of programmatic network APIs and model-driven architectures, network operations are more and more automated. Being able to predict network state in the future allows for the orchestration and path computation engines to figure out network issues before they impact operational performance, to estimate best and feasible network or infrastructure maintenance windows, to plan for optimum capacity upgrade or traffic engineering re-optimisation as well as provide resource allocation with guaranteed service level agreement. Amongst all the key performance indicators available our project aims to forecast the per-interface traffic utilisation variable to address the specific challenge of finding the best maintenance window. When traffic is predicted on all the network interfaces, Cisco WAE algorithm for demand deduction can be used to build the related predicted demands i.e. forecasted traffic matrix from source to destination. When traffic matrix for demands is available, Cisco WAE impact analysis capability allows to compute what if analysis and provide with the state of the network in case of link or node failure. Then, it is possible to get the list of all the feasible maintenance windows not violating any specified maximum link utilisation thresholds and schedule for the less impactful. The main hypothesis to our predictive analysis project is that the network traffic utilisation can be collected as a multiple variables time series where each variable represents per-interface traffic utilisation in a specific direction over time. From experience, we can also make the hypothesis that the time series will exhibit seasonality and trend.

The dataset comes as a collection of plan files. The collection spreads across 3 months with acquisitions made every 10 minutes. Each plan file represents a snapshot of the network state at a given point in time. Although its content describes various components of the network, this project focuses on the Traffic Measurements of the Interfaces. Additionally, a second dataset is used. It is a 1-day dataset with a 15-minute cadence and information on Demand Traffic. This is used for comparing the performance of the proposed approaches. Finally, the sequence of plan files is interpreted as a time series.

Dataset of the Interface Traffic

The training is done on the Traffic Measurement of an interface, with unique keys Node-Interface (Fig.1, Fig. 2). The model definition is based on data for a single interface. 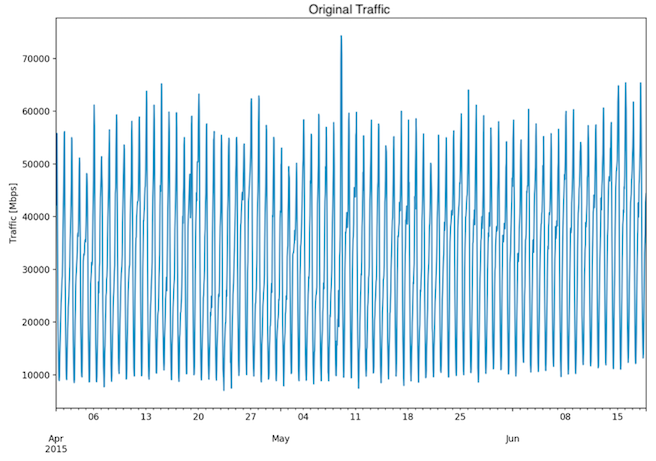 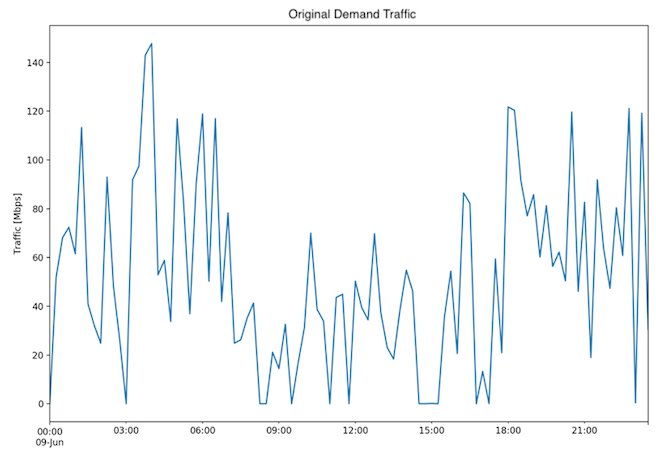 The quantitative data has been explored through graphical and numerical summaries. 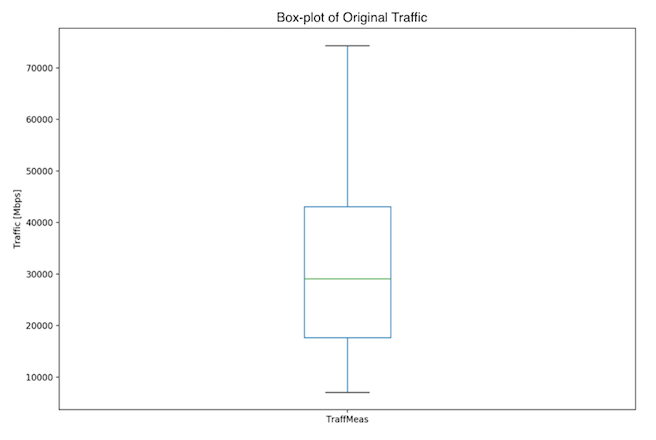 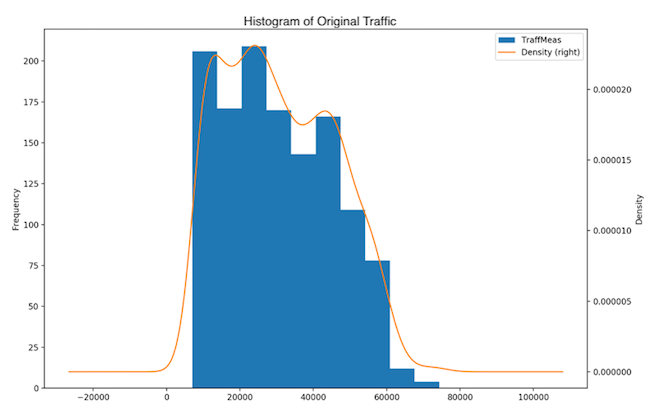 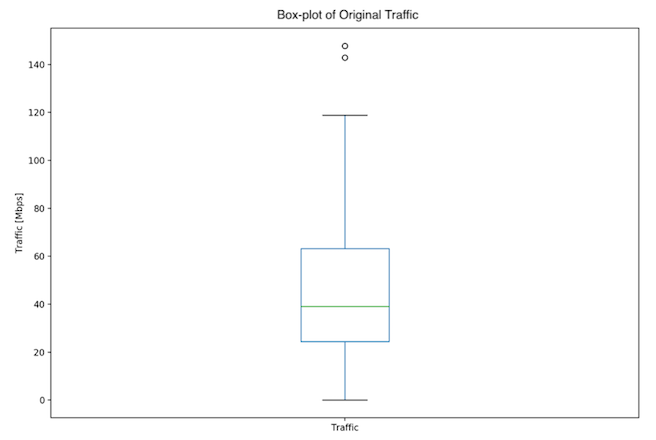 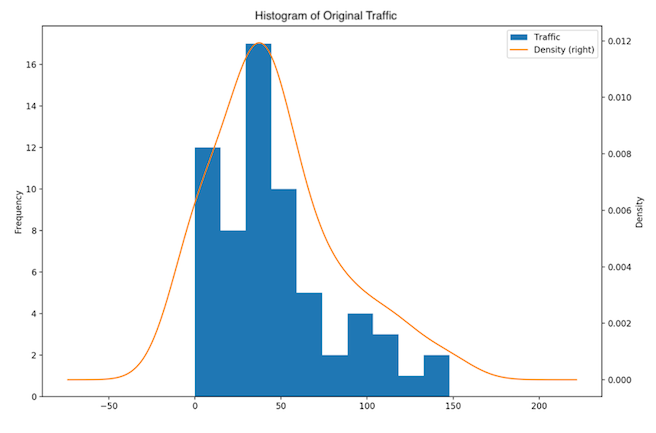 Measures of centrality and variability

Table 1: Measures of centrality and variability

The dataset has been decomposed in seasonality, trend and cycle and residuals. There was no clear proof of a trend but there was proof of a 24-hour seasonality in the case of the 3-month dataset (Fig. 7, Fig. 8). 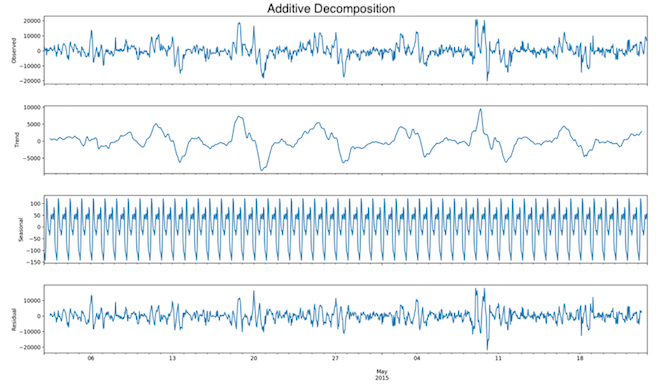 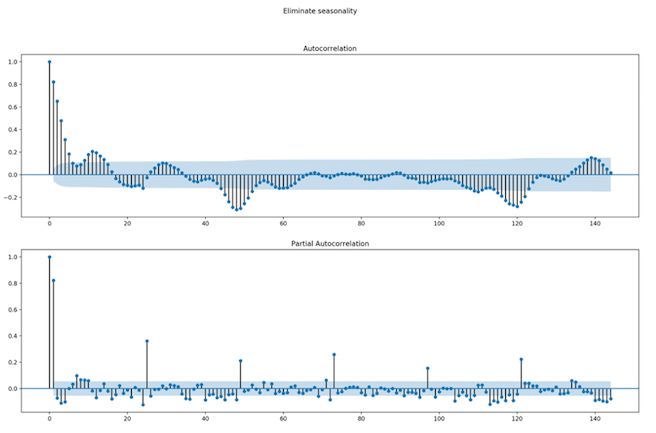 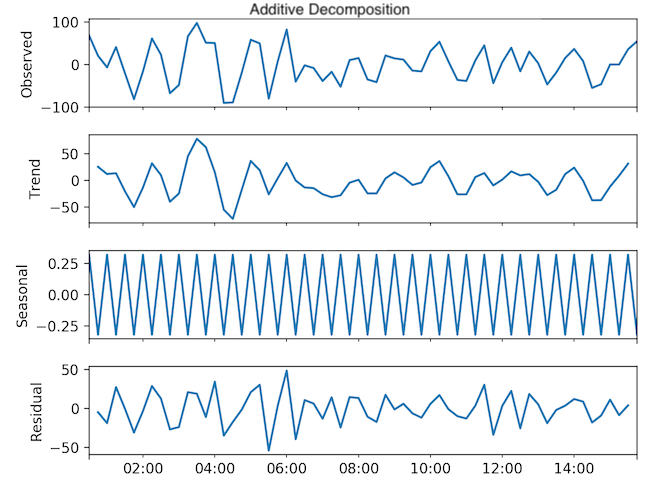 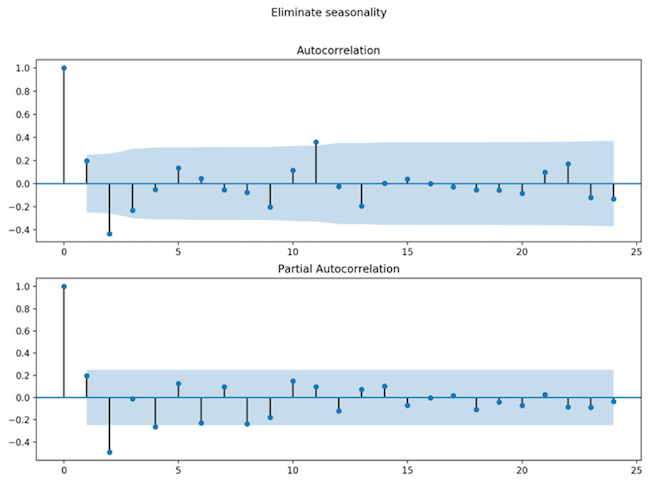 For reasons of content simplification, we present here the preprocessing of the 3-month dataset. The 1-day dataset has been similarly preprocessed.

The 3-month dataset had missing plan files on several occasions. The missing data has been compensated for. After examination, it has been concluded that there is no pattern in the missing data, that the missing data does not depend on its missing value, and that there is little missingness. Careful analysis revealed that a resampling based on a 1 hour average can not only provide a good estimate of the original dataset, but also decrease the computation time. Therefore, the data has been resampled.

Furthermore, the data is standardised with the Min-Max. Once the transformations have been applied, the skewness is -0.0052 and the p-value is 0.939, meaning that there is a 93% chance that the data follows a Normal distribution (Fig. 11). 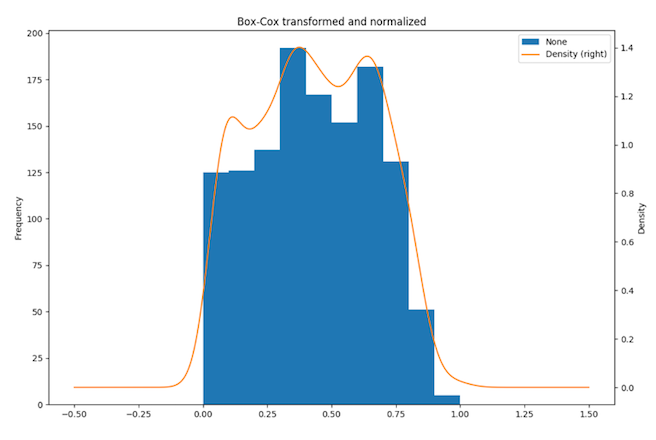 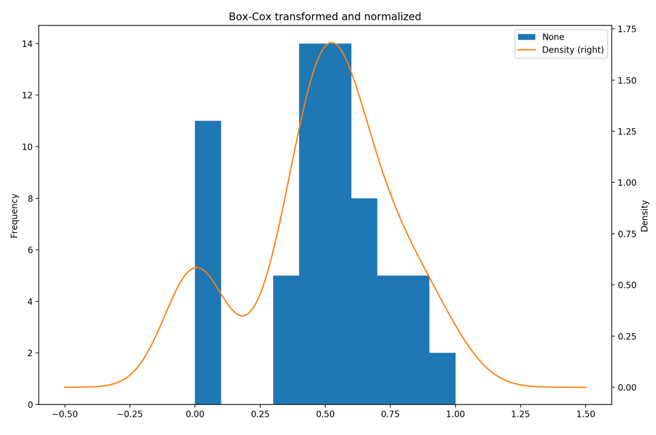 The augmented Dickey-Fuller test has been used for assessing the stationarity. The H0 hypothesis: data is non-stationary, is confirmed by the Test-statistic being greater than the 1% critical value. Table 2 shows the stationarity values. After separating the seasonality from the data by means of differencing, the p-value stays below 0.05 and the Test-statistic drops lower than the 1% critical value -3.43. Thus, one can reject the null hypothesis and accept the alternative hypothesis that the data is stationary.

The predictions are made on transformed data. A back-transformation of Min-Max standardisation and Box-Cox is applied before giving the final traffic prediction.

The development process is illustrated in Fig. 13. 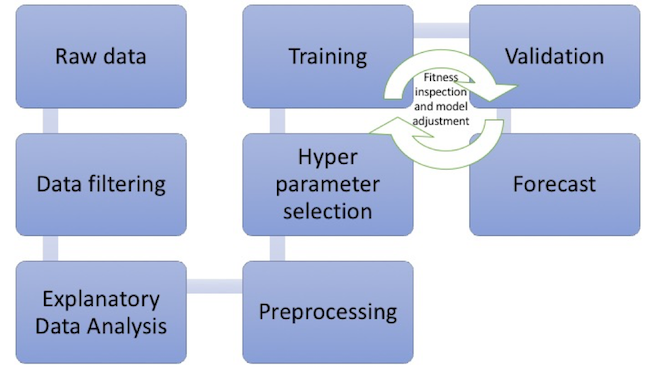 For reasons of content simplification, we present here the methodology applied to the 3-month dataset. The learning phase is similar for the 1-day dataset.

The authors of this project have come to the current solution through an iterative process. Based on our trials, the traditional statistical methodologies, such as simple linear regression and seasonal ARIMA have not had a good performance score on test data. Thus, a more modern approach has been considered: the Long Short-Term Memory Recurrent Neural Networks (LSTM). For training phase, the RNN receives as input the current and seasonally neighbouring traffic values. LSTM then fits a non-linear model to the training data. Next, K-fold cross-validation is used. This splits the dataset in subsets, computes a model for each training subset and measures the scores of the model on unseen validation data. In doing so, cross-validation ensures model definition without overfitting. Finally, a new dataset is brought in, as one would do in production. This dataset is for test purposes and its associated score can be compared to the training one, to understand how biased and how good the model is performing. The output of the LSTM RNN is given as a single traffic value per point in time.

At present, the problem was simplified by assuming that the traffic time series is self-descriptive. I.e., there are no external factors that influence the trend, seasonality, residuals. Currently, the training and predictions are done on a node-interface-level. An enhancement to the tool can be that of introducing other telemetry data as new features (e.g. traffic of other interfaces from the same node, link failures, path counts).

The traffic dataset can be considered a time series. A first attempt at estimating the dataset has been performed using simple linear regression. Along the development of this project several other approaches have been evaluated. These methods are autoregressive:

Seasonal ARIMA has the advantage of separating and describing the time series with its decomposed parts. The original time series showed signs of seasonality, thus, the series has been seasonally adjusted. The 3-month dataset showed strong seasonality within each day, whereas the 1-day dataset showed a seasonality within each half an hour, but with more variability in the length of the seasons. The forecast of seasonal ARIMA was good in the case of the 3-month dataset, where the seasonality could predominantly describe the series; in the case of the 1-day dataset it was less successful.

Patterns in the network traffic data can be learned during the training phase. As a result, a model that captured the features of the data is defined. This can further be used for future predictions.

The LSTM RNN uses traffic time-series and past values from the same season as input for the visible layer. Each such feature has a weight associated with it based on the hidden layer. The RNN’s hyper-parameters are customisable. The model is defined by the weights and at the end of the training phase, the model can be saved in memory.

There is one LSTM RNN model per interface. It is assumed that a model from one interface would not work on a different one. Furthermore, the training does not incorporate external information about the traffic on a specific interface.

The offline training phase has provided a model for future use. This LSTM model can ingest a window of traffic data, as past seasonal points, and can make a forecast of the upcoming traffic. If needed, the RNN gives room for improvement. One is able to inject new training data and actualise the model by building on top of the original one, effectively adding to the initial training. This ensures a forecast in the context of past, but also recent or new events.

The offline-built model is loaded and fed with new input data, i.e., the traffic values from the last season. Output values of the RNN will represent forecasted traffic based on the historical data. The predicted data provides a basis for scheduling the maintenance of the network. Moreover, the traffic can be fed back in order to estimate demands of the network and understand whether a certain threshold will potentially be exceeded. 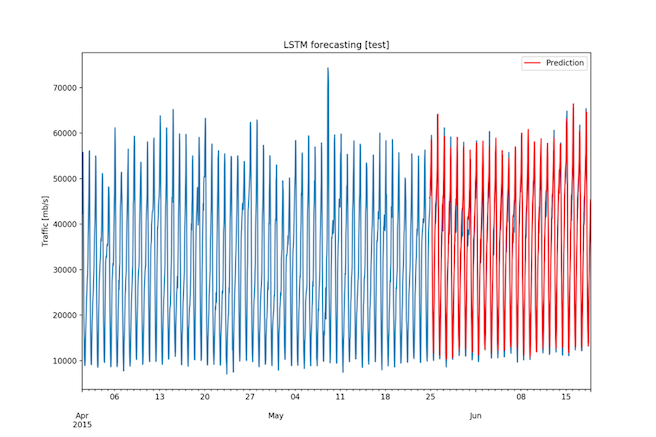 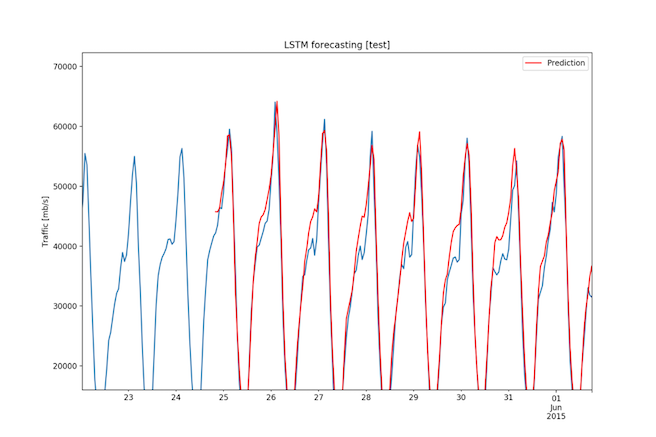 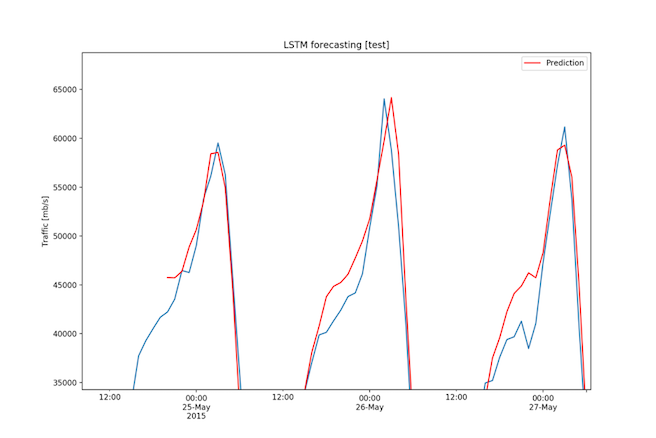 The RMSE was 43.56 Mbps, a value rather high considering that the range of the data is 147.71 Mbps and that the standard deviation is 37.51 Mbps. Nevertheless, as it can be seen in the Figure 17, the predictions follow the pattern of the ground truth. One could consider improving the model by extending the neural network, bringing in more training data or adjusting the hyper-parameters of the RNN. 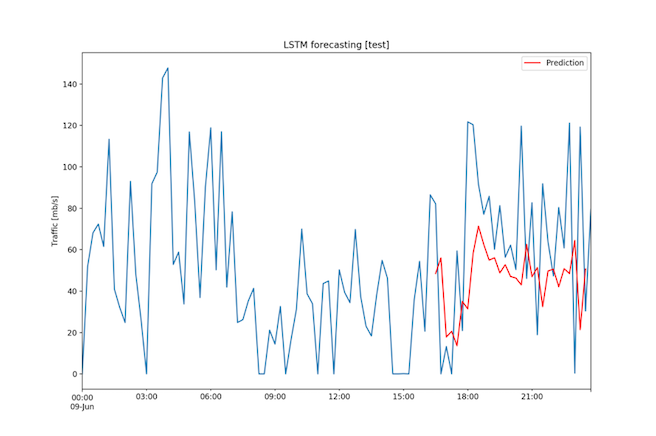 The data has been segmented in two parts: training and test. The training data represented 67% of the original data. Model performance has been assessed using the loss function mean squared error on all three parts of the dataset: training, validation, and test.

33% of the data was put aside for testing purposes, i.e., no bias had been introduced by using this data in the training phase. The values have been given as input to the RNN and the resulted forecast was compared to the ground truth. The performance of the model on the test data has been assessed using the loss function mean squared error. The test scores are summarised in transformed and original scale in Table 4.

The work presented here is a piece of the analytics puzzle. In order to take this to the production level, more pieces need to be added:

The deployment would result in an intelligent platform that can be fed traffic data, learn from it and forecast future time points. The advantage of NNs that learn from new data would increase the robustness and flexibility of the model to a large variety of data and keep up with the latest traffic patterns.

The results aforementioned add to the confidence in network automation. Production environments could intelligently use predictions to anticipate events and thus keep up with the volatility of network demands.