They have been announced in June 2019 on this blog post: https://blogs.cisco.com/sp/cisco-ncs-5500-welcomes-400ge-and-doubles-installed-base, it’s now time to present in detail the two new line cards with 400 Gigabit Ethernet (400GE) capabilities.

And we will start with 8-min of videos to introduce the topic:

We will cover the following in this blog post:

We plan to add other sections to this article in the future. It will be a living document.

Before inserting the new products, we need to verify the system is running the minimal IOS XR release and is equipped with the appropriate “commons”.

It will be mandatory to upgrade the fabric cards and the fan trays in the chassis before any 400GE line card insertion.
We differentiate the new fan trays and fabric cards by the number “2” at the end of the product IDs:

A few notes on these parts:

To avoid incident, we have it clearly labelled on the new parts.

Regarding the other chassis parts: Route Processors, System Controllers and Power Supply Modules:

The new fan trays and fabric cards are supported since IOS XR 6.6.25 but don’t be confused by it. We will need a minimum version of IOS XR 7.0.2 to support the new line cards NC57-24DD and NC57-18DD-SE.
Regarding the features supported at inception, please refer to the feature section of this blog post.

Before describing the two new cards and their respective port density, let’s take a look at the ASIC powering them.

These new line cards are powered by 2x Jericho2 NPUs from Broadcom.

These ASICs are offering 4.8Tbps of interface bandwidth and 5.6Tbps to the fabric. 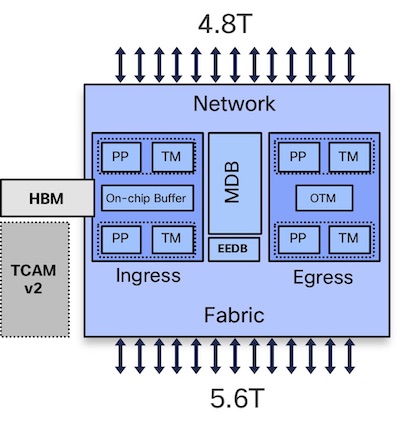 Like its predecessors (used in NCS5500 Series), the J2 NPUs are made of two cores, an ingress pipeline and an egress pipeline. It’s capable of approx 2000 MPPS.
The main differences will be:

The Jericho2 uses a High Bandwidth Memory (HBM) instead of a GDDR5. We have double the amount of packet buffers (8GB) and double the speed to access it (1.8Tbps). One of the benefits of this HBM is it does not consume “links” to connect to the NPU, offering more to the interfaces and fabric.
Keep in mind that this HBM is only used to store packets in case of congestion (micro-burst or longer-term link saturation). Most of the time, the packets will transit only through the on-chip buffer (OCB) which is now twice the size of former generation (32MB) and they will not be stored in the HBM.
You can check the studies done on J+ on this topic in other xrdocs.io articles:
https://xrdocs.io/ncs5500/tutorials/ncs5500-qos-part-2-verifying-buffering/ 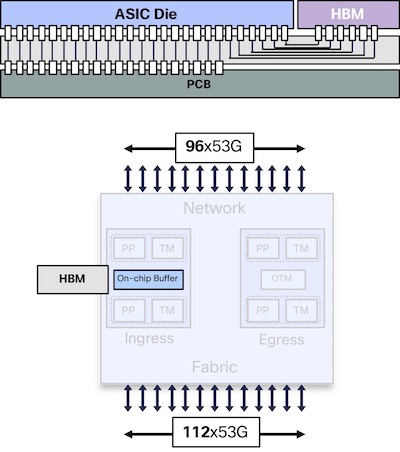 Also, very different from the former Jericho generations (J/J+), we will use a Modular DataBase (MDB) to store the router information (prefixes, MAC, MPLS, adjacencies, next-hop, …). As the name implies, this database can be carved at the boot up and allocate more or less space depending on the use-case. It permits to give more scale to L3 or to L2, etc.
Finally, we will use a newer generation of external TCAM with these NPUs too. 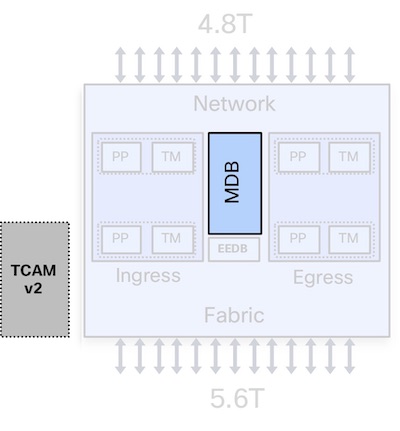 We will have two of these Jericho2s in each of the line cards we are introducing.

This first line card will offer 24 slots QSFPDD-capable. It means they will also be able to support QSFP+ (40G) and QSFP28 (100G) optics.

The front view of the card:

Reminder: the chassis must have been upgraded to IOS XR 7.0.2 minimum and must operate v2 Fabric Cards and Fan Trays before inserting these line cards.

The line card is slightly longer than former generations as shown here:

For NEBS compliancy, it will require new doors. They are currently in the roadmap.

Internally, the card is made of two J2 NPUs, each servicing half of the ports for a total of 4.8Tbps.

Despite the name 18DD, we have a total of 30 QSFP-DD ports on the front plate:

The other ports (highlighted in yellow in the diagram below) should be treated in pairs. That means what we can insert in port 1 is directly dependent of what has been inserted in port 0.

If you use only QSFP56-DD, only 18 ports can be populated, hence the line card name: 18DD-SE. Also, on the front plate, you can see in blue the ports that can be used with 400GE optics.

We will add more details on these subtleties in the next months while we are getting closer to IOS XR 7.0.2 release date.

For reference, here is the block diagram on the 18DD-SE line card:

Note: None of the NC57-24DD or the NC57-18DD-SE are MACsec capable but the timing features are possible and will be enabled in future software releases (of course, it will require the proper RP-Es).

The 8-slot fabric are made of 2 Ramon ASICs while the 16-slot fabric cards contains 3 of them.
Each Jericho2 connects to each Fabric Module with a total of 18 SERDES at 53.125Gbps.
They can be evenly distributed between one, two or three Fabric Engine (Ramon).

For the 8-slot chassis:

For the 16-slot chassis:

The 53.125Gbps per SERDES represents the raw bandwidth. After cell tax, encoding and correction, we can actually transport 45.8Gbps.

To calculate the bandwidth available per Jericho2, we will use the following math:

If we lose one fabric card, the NC57-24DD can not be line rate (around 86%) while the NC57-18DD-SE will still be.
It’s important to state the obvious here, we are talking about lab corner-cases since the situation where 12 ports 400GE of the same card will be used at an average level exceeding 86%, at the exact moment we lose a fabric card is virtually impossible.

Cisco invested in QSFP-DD for all the 400 Gigabit Ethernet plans.
For more details on the technology, the best place is certainly this CiscoLive session: https://www.youtube.com/watch?v=46D4zs_TlrM&list=PLWgSsi4SkfuaJaY6GeCE7wG52dKn-NOir

I want to bring to the reader’s attention that breakout of 400GE to 4 ports 100GE will not interoperate with most currently deployed technologies (based on SR4, LR4 and CWDM4).
It may sound obvious, but it is still worth mentioning that 400GE is based on 4 lambdas of 100G each encoded in PAM4 while the technologies above are using 4 lanes of 25G encoded in NRZ. That makes the interconnection impossible.
Breakout of 400GE is still possible, but it will imply to use 100G “one-lambda PAM4” optics on the other side:

In the other hand, QSFP28-DD will be perfect to breakout in two SR4/LR4/CWDM4. A perfect use-case for the NC57-18DD-SE ports operating in pairs, it will allow a smooth transition from existing 100G backbones to 400G.

At FCS, in IOS XR 7.0.2, we will support the “compatibility mode” where Jericho/Jericho+ line cards will co-exist with Jericho2-based line cards.
In this specific mode, the features and scales are aligned to:

The following list is still susceptible to change before the FCS date, but we will not support:

Features will be added to the support list release after release in the usual iterative process.
Also, in the future, we will add the “J2 Native Mode” where all the line cards inserted in the chassis are only J2-based. It will “unleash” the full capability of the ASIC. In the compatibility mode the features and scale are often limited by the lower common denominator, being the Jericho/Jericho+ NPUs.

With the introduction of these two new line cards, we are boosting the NCS5500 chassis from 3.6Tbps to 9.6Tbps per slot. That’s 153.6Tbps per router !!!
More details will be added to this post or in new ones very soon.
As usual, use the section below for comments and questions.